Stress and wound healing in the spiny mouse, Acomys 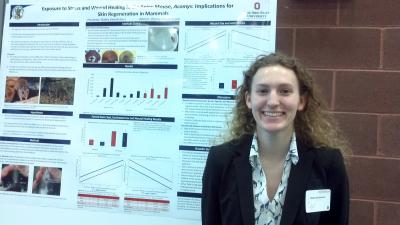 All organisms face a variety of stressors during their lifetime, including predation. Animals have developed adaptive mechanisms to protect against such stressors. One particular rodent, Acomys, has extremely fragile skin that tears upon contact, presumably to escape predators. In order to combat open wounds, the rodent also regenerates tissue with almost no scarring, a definite feat in the mammalian world. This project aims to determine whether or not 1) Acomys has a lower stress response compared to other mammals; 2) attenuated stress response is a key factor in rapid wound healing; 3) predator exposure affects wound healing. Thirty-two Acomys (16 males: 16 females) and 16 lab strain mice (8 males: 8 females) were tested on a commonly used stress paradigm; forced swim test. Baseline, stress, and post-stress corticosterone levels were assessed in both species. Male and female Acomys used in the first experiments were equally divided into two groups: 1) experimental group exposed to a mock predator; 2) control group without such exposure. A remote-controlled Hexbug robot was used as a predator. Acomys were then anesthetized and wounded with a 4mm ear punch. The control mice were wounded in the same manner, but without exposure to the mock predator. Results show that forced swim test increased corticosterone concentrations in both species. Acomys had lower corticosterone concentrations compared to the lab strain for both sexes for baseline, stress, and post-stress conditions. Lower response to stress and quick return to baseline levels were associated with more rapid wound healing only in male Acomys. There were no differences in wound healing between predator-exposed and control group in male or female Acomys. The results are discussed in light of the relationship between low stress response, rapid wound healing, sex differences, and regenerative ability in mammals, and its application to human genetic and clinical studies.

Special thanks to Dr. Ashley Seifert for the use of his lab and wealth of information on Acomys and wound healing, as well as to Dr. Leah Pyter for help with assays and her knowledge of wound healing and stress. Thanks to Shishir Biswas and Jennifer Simkin for their help collecting data and Acomys wrangling. This research was supported by the Undergraduate Research Scholar award and  the URO Summer Research Fellowship at the Ohio State University.