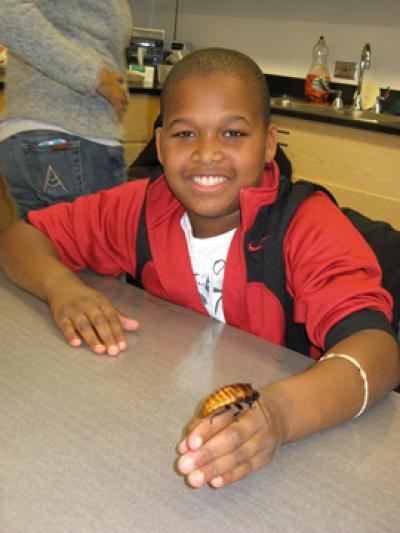 First, the students were given a brief overview of U-Research and explanation of the activities they would be engaged in. They were then introduced an undergraduate student researcher who has been working in the lab. The goal was to expose the students to opportunities they may encounter in college regarding science education and scientific research. After this brief introduction, the students were given breakfast during which Zeynep Benderlioglu explained in more detail about the research done in her lab. The emphasis was given to how working with live arthropods can help us understand the interactions between animals and their environment while giving important insights into human behavior.

The students then proceeded with the introduction of live arthropods. A total of eleven species ranging from Madagascar Hissing Cockroaches, millipedes, to Emperor Scorpions were studied. The students had a chance to handle some of the animals while given fun facts about them. The goal of this exercise was the exposure to diversity in nature. It was also explained that sometimes scientists just step into their backyards and make scientific discoveries. The last activity was designed to teach how serendipity can play a role in discovery. The  students were given a brief introduction of deductive and inductive reasoning in a language suitable for their grade level. Afterwards, they proceeded with experiments on live termites. In that activity, they were led to a discovery of the workings of termite trail pheromones by papermate pens. The program ended with a brief tour of the Green House for a possible future site visit.