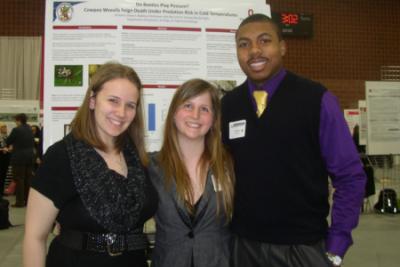 Threats of predation and the subsequent cost of reproduction have triggered various adaptive anti-predation mechanisms among invertebrates—one such being thanatosis, or death-feigning in beetles. Previous studies have found that the death-feigning frequency occurs more often in cold temperatures, since cold-blooded invertebrates cannot escape predators quickly under these conditions. These studies, however, did not directly test thanatosis under predation threat in varying temperatures. Our study aims to address this issue. In addition, we also attempt to investigate reproductive plasticity —whether female beetles change their behavior after mating.  Male, and gravid and virgin female cowpea weevils, Callosobruchus maculates, were exposed to four experimental conditions where both temperature (low and warm) and predator cues (present or absent) were manipulated. The frequency and duration of thanatosis were recorded for each manipulation. The results show that cowpea weevils feigned death longer under predation risk compared to those without such risk in cold temperatures. On the other hand, the weevils feigned death shorter, opting instead to run away under predation threat compared to those under no threat in warm temperatures. Neither the sex nor reproductive status of the beetles was a significant factor in displaying thanatosis. Our results support and expand previous research. These findings can help better understand the adaptive value of anti-predator behaviors under varying environmental conditions across taxa.