Aggression and mating success in the fruit fly, Drosophila serrata 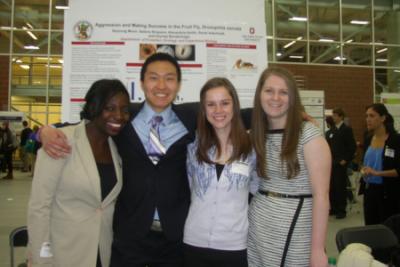 Aggressive behavior among males is used to establish dominance and ensure access to potential mates and valuable resources in a variety of species. Although most studies focused on vertebrates, there is a promising area of new research with fruit flies, the staple species of genetics, on agonistic behavior and mating success. The fruit fly, Drosophila serrata has recently become the model species in the study of mate preference. Previous research indicates that females of this species have the ability to evaluate and select their mates based on olfactory, chemical cues. Also, D. serrata females appear to copy the behaviors of other females to select potential mates. These studies have so far ignored the behavior of males. In an attempt to close this gap in our knowledge, we investigated the aggressive behaviors exhibited by D. serrata males and its relation to mating success.  Four virgin D. serrata males were introduced to a confined arena with a virgin female of the same species and videotaped. The duration and frequency of aggressive encounters, such lunging, fencing, and boxing, as well as the occurrence of mating were coded by using J-watcher, a behavioral analysis software. The coded behaviors were then examined by statistical analyses to assess whether any of the aggressive behaviors predicted mating success.  Our results show that D. serrata males did not frequently exhibit the agonistic behaviors most common to the other species of the same genus. Furthermore, none of the aggressive displays predicted mating success. Male behavior does not appear to play a significant role in securing potential mates. Instead, male chemical signals and female social interactions seem to determine mating success as shown in previous studies. This may have important implications for sexual selection in other species and behavioral genetic studies with the genus Drosophila.