The effect of limb regeneration on functional lateralization in arthropods 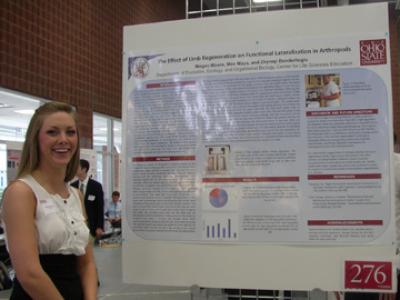 Development of the left and right functional asymmetries in the brain has long fascinated scientists and non-scientists alike. The dominance of left versus right hemispheres in mediating specific cognitive and sensory functions has often been studied through handedness and footedness in vertebrate animals. Handedness and footedness are in turn thought to be a behavioral outcome of this functional lateralization. Our current project examines the lateralization of sensory perception and predator capture in arthropods. This is a promising area of research, because little has been studied in arthropod hemispheric lateralization. In addition, arthropods can regenerate lost limbs. This may have important implications in altering the existing neurological wiring in the arthropod brain. Our experiments have used the wolf spider, Schizocosa ocreata to study this phenomenon. The offspring of the wild-caught S. ocreata were raised in the laboratory. They were randomly allocated to three groups; a) control; b) left-limb removed; and c) right-limb removed. The molting data were collected. After the fifth molt, the left forelegs were removed from all b) group individuals, right forelegs from all c) group individuals. The control group was left undisturbed throughout the study. Behavioral trials were conducted in an arena that contained two prey animals, detectable through vibratory cues only. One of the preys was placed on the left side of the arena, the other on the right side. The spiders from all groups were then individually tested for the tendency to capture the prey on the right versus left. The experiments are currently in progress. It is predicted that the control spiders will consistently display a tendency to prefer one side of the arena over the other and regenerated limbs during later development will disturb this lateral preference.  Our study will help better understand how disturbances during critical periods of development may alter functional lateralization.