Are Bonobos Really Peace Loving? A Study with Captive Populations 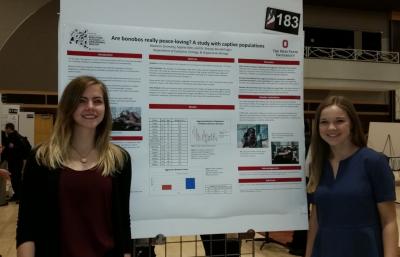 The bonobo, Pan paniscus, is one of the closest extant relatives of humans and the last Great Ape species to be scientifically classified. Based on previous research, it has held the reputation of being a gregarious, conflict-free species marked by strong female alliance and dominance against males. Peaceful sexual interactions, especially among females, are thought to reduce tension among individuals and promote cooperation in such group activities as foraging. Recent evidence, however, indicates that bonobo dominance hierarchy is not so clear cut and significant amount of aggressive interactions and conflict occur among groups. Our current study aimed at clarifying dominance ranks in a captive bonobo population at the Columbus Zoo and Aquarium (N=16, Average Age= 23 yrs) by surveying aggressive and submissive behaviors. We predicted that males will exhibit more aggressive behaviors in congruence with human and chimpanzee males, and, be equally dominant to females. We recorded our observations with GoPro video cameras strategically placed in three enclosures. We noted the frequency of chasing, charging, biting, kicking, and pestering as aggressive behaviors, and, grimacing, teeth baring, yielding, and fleeing as submissive actions by using an event-recording software, ZooMonitor (Lincoln Park Zoo, Chicago, IL). The results are being analyzed. Bonobos are currently classified as endangered on the Red Data List due to habitat loss and poaching. The Columbus Zoo provides a unique opportunity in conservation efforts with a large group of bonobos in its care. Understanding their true social structure and interactions is crucial in maintaining healthier populations in captivity with important implications in wild life conservation.