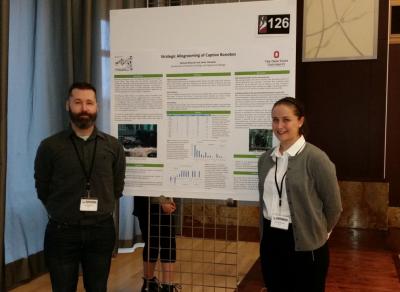 Social allogrooming among the members of the same species serves important functions across taxa. Observed in a range of animals from insects to humans, allogrooming helps reduce disease transmission, maintain social structure, and increase societal bonding. In bonobos (Pan paniscus) and other primates, allogrooming is an important part of the social repertoire that reduces tension, which may arise as a result of aggressive acts directed at individuals, thereby increasing the chances of reconciliation and group harmony. Our study aimed at understanding the correlates of allogrooming in a captive bonobo population at the Columbus Zoo and Aquarium in Powell, Ohio. Drawing upon our previous research at the Zoo on bonobo dominance relationships, we investigated whether low-ranking individuals engaged in more grooming and were more selective in exhibiting this behavior. We hypothesized that individuals would spend more time grooming others that are higher-ranking than themselves, presumably to gain favor, or, elevate their own status. Fourteen bonobos (8 males and 6 females) were observed at the Zoo. Fifty hours of interactions were videotaped in enclosures recording the frequency and duration of grooming among individuals. The target and initiator of the grooming behavior and dominance status of the individuals were noted by using a behavioral analysis software to be subsequently exported to a statistical program. The analyses are ongoing. Although identified as separate species in 1929, bonobos remain relatively understudied due to their endangered status, their only ecological niche in war-torn Democratic Republic of Congo, and low numbers in captivity. This study can be used to inform further research concerning bonobo societies, as well as providing valuable insights into the group dynamics of other closely related social apes, such as chimpanzees and humans.