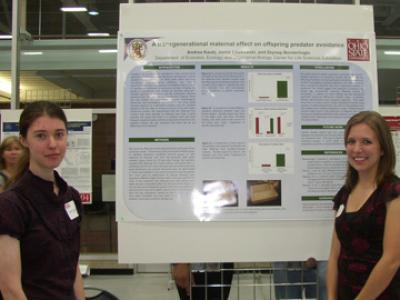 Predation risk and its cost to reproduction have received much attention in behavioral ecology. Nonhuman animals have evolved adaptive mechanisms to avoid being eaten while optimizing reproductive function during predation risk. Previous experiments indicated that exposure to predators alters a variety of reproductive behaviors in nonhuman animals, including the timing of reproduction and number of surviving offspring. Prenatal exposure to predators and the subsequent offspring behaviors have received relatively little attention, however. The current project follows upon a previous study where gravid female wolf spiders, Schizocosa ocreata (Araneae: Lycosidae) were either maintained in standard laboratory conditions (control group) or with exposure to chemical cues from the generalist wolf spider predator Hogna helluo (Araneae: Lycosidae) for 12 days after mating. The offspring of the spiders from both groups were raised to maturity and predator avoidance behaviors were assessed for the current project. Prior to the predator avoidance trials, the offspring from both groups were water-starved for a day. On the day of the trials, they were strategically placed in an arena where they were forced to cross a predator zone to reach the water source. Each trial was videotaped. Latency to cross the predator zone, time spent immobile, and time spent in predator and non-predator zones were scored for both groups. The results are currently being analyzed. It is expected that the offspring from mothers that were exposed to chemical cues from a lethal predator will exhibit an increased latency to reach the water source, spend less time in the predator zone, and more time immobile compared to the offspring from control mothers. The results will suggest that exposure to predation risk during egg development enhances offspring survival. This will help better understand the adaptive value of maternally induced antipredator behaviors in nonhuman animals.